Home » Important Things to Know About Baking in a Convection Oven

Important Things to Know About Baking in a Convection Oven

As technology has improved, so to has the ease at which people can bake at home. While convection ovens used to be the exclusive domain of professional bakers, today they are available to any amateur or wannabe baker for a very affordable price. However, there are a lot of misconceptions and gaps in knowledge when it comes to using convection ovens and getting the best out of them.

At Repair Aid, we install, service and repair convection ovens on a daily and weekly basis. As such, we have very good knowledge about the functions and inner workings of convection ovens. In this short guide, we’re going to walk you through some of the most important things you should know about baking with a convection oven.

First of all, it’s important to remember that by ‘convection oven’ we just mean an oven (that can be either gas or electric) with a convection setting. This setting moves air around the oven, and the food within, to evenly cook the food at a rapid temperature by making use of a fan and exhaust. This makes food crispier and, crucially, it saps moisture out of the ingredients which is often preferable when it comes to baking. This is in contrast to conventional oven settings which heat from a fixed source – such as a heating element above or below the food.

Due to the speed at which the convection setting bakes food, it’s important to check the food towards the end of your allocated cooking time to ensure it doesn’t end up overcooked. You’ll probably want to start doing this from about halfway on as this will allow you to see in advance if you need to keep a close eye on the food. Baking is so much more than just looking at the timer – the type, quantity and moisture within the ingredients used can definitely affect the overall cooking time. This means that you need to be flexible until you generate a sort of ‘natural’ intuition and better understanding of your cooker and the way it interacts with the food you are baking.

Because of this fast cooking process, you’ll want to try and lower the temperature when it comes to convection settings. This is because many recipes aren’t written with convection ovens in mind. So you’ll want to think about reducing the temperature, but not by much – perhaps by about 10°C. As with the timing, you’ll get a feel for how your particular oven and the food you are baking interacts and you may want to adjust this over time.

Air flow is an important part of how convection oven settings work so well for baking. As such, you’ll want to minimise any disruption of this air flow. This means you don’t want a full oven when you’re baking with the convection setting as more food = less airflow. While you can use multiple racks, you just want to ensure that those racks aren’t totally stacked.

The same thing goes for using pans and sheets that have borders and edges that are too high. You’ll want to try and use low-rimmed or rimless sheets as this will allow the air to circulate better. Of course, if the food you are baking depends on high-rim trays or cases (such as bread) then, of course, use higher-sided containers, sheets and so on.

Despite how much bakers love to use the convection setting, it’s not always necessary – nor even good – for certain recipes. For example, some simple breads, cakes and soufflés don’t actually benefit from the combination of fan and exhaust. In fact, some of them can end up rising unevenly as a result of this process. What convection ovens are great at baking includes cookies, biscuits, scones and so on. 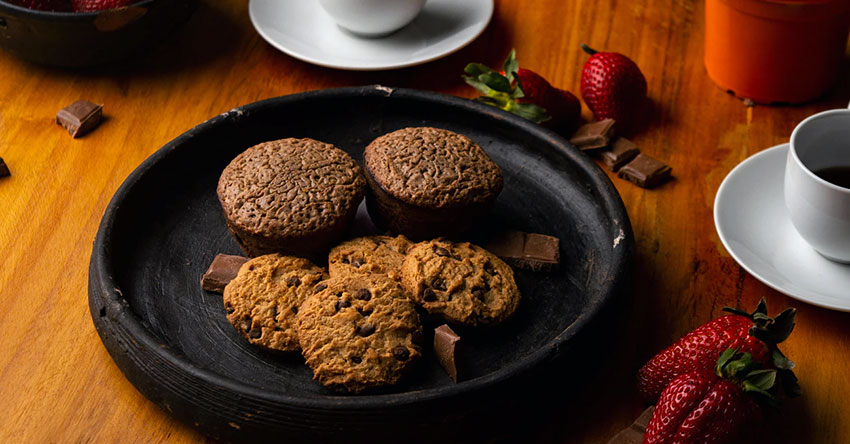 Often it really does depend on the density of the dough. If the dough is dense, it’s better baked with a convection setting; if it’s not, it’s probably better baked with a conventional setting. However, for the most part, convection oven is the preferred way to bake. You may even find that your oven has a specific ‘convection bake’ setting so make sure to consult your unit’s user guide to see if this is an option.

The main thing to keep in mind when baking with a convection oven is that it’s a learning process. You are likely to make mistakes but, when you get the formula right, the end product will likely end up better than it has ever been in a conventional oven.